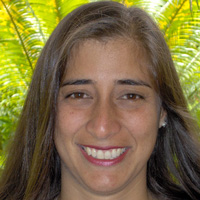 Dilia Navarro is a lay Diamond Way Buddhist teacher from Caracas, Venezuela, where she worked as an electronics engineer. She first came into contact with Buddhism in 1993 and met Lama Ole Nydahl, and his wife Hannah, in 1994. In 1997, along with her brother and sister-in- law, she took responsibility of the Diamond Way Center in Caracas, and since then she has organized courses and helped form all the centers and meditation groups in Venezuela. Since year 1998 she started translating for Lama Ole during his courses in Venezuela, and since then she also started to help with the translations of the meditation booklets. In 2003, Lama Ole asked Navarro to travel and give teachings, and she has been travelling and teaching mainly throughout North, Central, and South America since. Ends of 2016 she moved to Germany where she lives today.