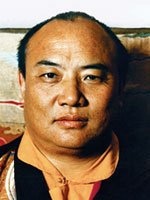 H.H. the 16th Karmapa Rangjung Rigpe Dorje (1924 -1981) was born in Derge province in Eastern Tibet. The previous Karmapa Khakhyab Dorje left a letter setting forth the circumstances of his next incarnation. On the basis of this letter the authorities of the Tsurphu monastery were able to successfully locate the child. In 1931 the young incarnate was ordained as a novice monk… (read more →) 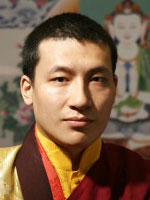 H.H. the 17th Karmapa Trinley Thaye Dorje was born in Tibet on May 6th 1983. He was the first son of the 3rd Mipam Rinpoche, a great Nyingma Lama, and Dechen Wangmo, the daughter of a noble family descending from King Gesar of Ling. At the age of one and a half the boy started telling people that he was the Karmapa. In 1994, he and his family managed to escape from Tibet to Nepal and then to India… (read more →) 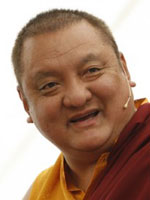 An emanation of Buddha Amithaba, Kunzig Shamar Rinpoche is second to Gyalwa Karmapa in the spiritual hierarchy of the Karma Kagyu School of Tibetan Buddhism. The first Shamar Rinpoche, Khedrup Trakpe Senge, was the principal disciple of the 3rd Karmapa, Rangjung Dorje. His second incarnation, Kacho Wangpo, received the Red Crown from the 4th Karmapa, Rolpe Dorje, an exact replica of Karmapa’s… (read more →) 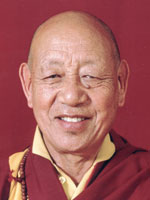 Lopön Tsechu Rinpoche (1918-2003) was born in the Kingdom of Bhutan. When he was 13 years old, he left Bhutan to study and practice under the spiritual guidance of his uncle Lama Sherab Dorje in Nepal. There he received full dharma training and meditated under severe conditions in the caves of Milarepa and in the holy places of Guru Rinpoche. In 1944, Rinpoche met H.H. the 16th Gyalwa Karmapa… (read more →) 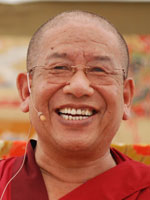 Sherab Gyaltsen Rinpoche, a highly respected lama of the Kagyu lineage, is a “Maniwa’, a title given to masters of the Loving Eyes practice who have accomplished at least a billion OM MANI PEME HUNG mantras. Rinpoche was ordained in Rumtek monastery by the 16th Karmapa, Rangjung Rigpe Dorje. An exceptionally gifted student, he mastered all aspects of traditional Buddhist study… (read more →) 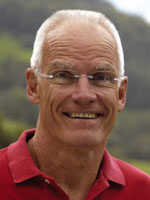 Lama Ole Nydahl is one of the few Westerners fully qualified as a lama and meditation teacher in the Karma Kagyu Buddhist tradition. In 1969, he and his wife Hannah became the first Western students of the 16th Gyalwa Karmapa. After completing three years of Buddhist philosophy studies and intensive meditation training – including the transmission for a unique practice called Phowa… (read more →) 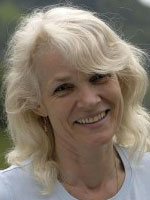 Hannah Nydahl (1946-2007) together with her husband Ole became the first Western students of H.H. the 16th Karmapa in December of 1969. As well as being a qualified Buddhist teacher in her own right, for over 30 years, Hannah interpreted for the highest Karma Kagyu teachers such as the 16th Karmapa, and Lopon Tsechu Rinpoche… (read more →)

The role of the teacher in Buddhism

“On the Small Way level of cause and effect a teacher is useful, but we can make do with the books. In the Mahayana which develops the inner qualities of compassion and wisdom, a teacher is more important. Involving more aspects of our totality, it helps to have a living example and somebody to watch our development. But the Diamond Way does not even start without a teacher. If no one carried the living experience and was able to pass it on, intellectual or cryptic books and pictures whose esthetics one might like or not like would be all that we have. If there were no living holder of the experience, there would be no access to their transformative power. So, for the highest level one needs a teacher. It is important, however, to see him or her not as a person or god but as a mirror to one’s own potential. Showing us our timeless nature with countless skillful means, he actually represents the Buddha.” – Lama Ole Nydahl on Learning in a Total Way.